Robin's (Teen Titans) senses are at the peak of human potential; to the point where he was able to hear a silent snake in the darkness.

To have the senses at the best of human capability.

"Think yer something special, don't ya? Think yer the only one in the world with built in radar? Punk, we all radar. It's sense, just like smellin' or hearin'. Men have let decay cuz they got eyes. You got lucky, yours was mutated. You got a free ride."
― Stick to Matt Murdock/Daredevil (Marvel Comics)

"Somebody's in my car."
― Brock Samson (The Venture Bros.)

The ability to have the senses at the peak of human capability. Sub-power of Peak Human Condition.

User's five senses (hearing, smell, taste, touch, and vision) are pushed to the highest limits of human perfection. Individuals with this ability are capable of seeing further and in darkness better, acutely touching ink on a page, hearing small sounds, having a smell capability similar to an animal's and tasting more accurately than normal members of their species.

Steve Rogers/Captain America (Marvel Comics) had his natural senses pushed to the peak of human potential.

T’Challa/Black Panther (Marvel Comics) due to the powers of the heart-shaped herb; the Black Panther was granted heighten human senses.

Stick (Marvel Comics) claimed that he developed his senses to their heightened levels through training and practice.

Elektra Natchios (Marvel Comics) demonstrated the ability of heighten awareness to detect a threat to her well-being in the immediate vicinity before they commit the action. 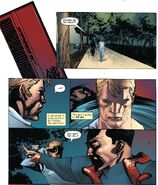 Danny Rand/Iron Fist (Marvel Comics) demonstrating the ability to detect a threat to his well-being in his immediate vicinity before they commit the action,...

... and unusually has keen eyesight along with focusing his hearing so intensely that he can hear sweat rolling down someones face.
Add a photo to this gallery
Retrieved from "https://powerlisting.fandom.com/wiki/Peak_Human_Senses?oldid=1698634"
Community content is available under CC-BY-SA unless otherwise noted.