Thanks to his incredible physical attributes, Constantine Drakon (DC Comics) is vastly faster than the average person.

"Wow! Now I don't suppose you'll tell me how you did that so fast. As, you know, a professional courtesy."
― Quinn to Matt Murdock/Daredevil (Daredevil 1998 #63)

The power to be faster than average/normal humans; even though this ability is not classified as 'enhanced'. Sub-power of Peak Human Condition. Real world version of Enhanced Speed.

The users' speed is at the highest limit of human potential. They are much faster than Olympic class runners, enabling them to run at 45 km/h - 64 km/h and swim at 12-15 knots. With this sort of speed, one could catch-up to or outrun moving vehicles, vanish in plain sight, are likely to always be first in running-races and have great reaction time. 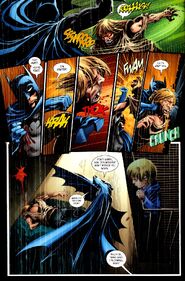 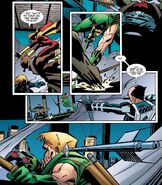 Damian Wayne (DC Comics) is significantly faster that he can disarm his opponents.

The strongest non-superhuman martial artist on Earth, Mr. Satan (Dragon Ball series) can move faster than can be seen.

Despite his sizable build, Chris Redfield (Resident Evil series) is as fast as a human can possibly be, allowing him to dodge a punch from the superhumanly fast Wesker.