Gilpetperdon/The Runner (Marvel Comics) is an ancient being whose usage of the Power Primordial over billions of years has made him the fastest cosmic being in existence.

"But wait w-w-w-wait...let me comprehend one thing at a time here alright? First of all... why does the truck go faster in reverse than it does does going forward? It seems like it accelerates infinitely. How many times have I rolled the speedometer over? I must be going a thousand miles per hour right now! In reverse! IN A BIG ASS TRUCK!"
― The Angry Video Game Nerd describing the truck's speed. (Angry Video Game Nerd Episode 118)

"Well, when are you gonna... I'm already back."
"See, where I come from, Prot, that's called "the fastest gun in the West" routine."
"Well, I don't come from where you come from, Dr. Becker."
" Prot, you've indicated in your notes that your planet K-PAX."
― Dr Becker and Prot (K-Pax)

The power to possesses a limitless level of speed and velocity. Sub-power of Absolute Body. The highest form of Enhanced Speed. Not to be confused with Speed Infinitum.

Users of this level are completely immune to speed affecting powers such as Speed Cancellation and Speed Theft.

Wally West/The Flash (DC Comics) can move at such high speeds that he can travel through time and space.

Through Nilfheimr Fenriswolf, Wolfgang Schreiber (Dies Irae) will always move faster than his opponent, regardless of their speed, unless they completely halt the flow of time.

Thanks to its time acceleration powers, Enrico Pucci's Stand, Made in Heaven (JoJo's Bizarre Adventure Part 6: Stone Ocean) is the fastest Stand in the series. 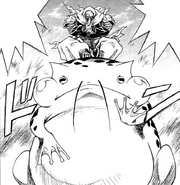 Despite his appearance, Guardian ÄRM Kung-Fu Frog’s (Marchen Awakens Romance) speed is the greatest of all the guardians. 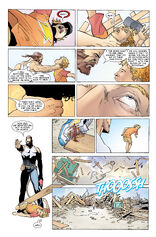 As Olympian god of Speed, Hermes (Marvel Comics) CAN MOVE at limitless speeds.

Sirius (Valkyrie Crusade) is the star spirit of sirius, and wields godlike speed.

Bebe Robots (Kim Possible)
Add a photo to this gallery
Retrieved from "https://powerlisting.fandom.com/wiki/Peak_Human_Speed/Absolute?oldid=1443592"
Community content is available under CC-BY-SA unless otherwise noted.