Demons (Kimetsu no Yaiba) are beings that possess unlimited stamina and vitality, simply being unable to get tired and accumulate fatigue no matter how hard they exert themselves, be it physically or mentally.

Possess a level of stamina at a maximum and limitless level.

The power to possess a level of stamina at a maximum and limitless level. Sub-power of Absolute Condition. Absolute version of Enhanced Stamina. Not to be confused with Absolute Endurance.

Users possess a level of stamina and vitality at a maximum and limitless level, breaking all logical and natural boundaries while transcending the concept itself. Essentially, an absolute stamina entails never getting tired no matter the circumstance, including conceptual attacks, curses, or divine forces attempting to limit or weaken the user's endless and boundless stamina. Users would be able to perform infinite amount of actions and tasks without feeling the slightest bit of fatigue. In combat situations, users would be able to unleash their ultimate techniques and attacks continuingly and endlessly.

In short, the user will never get tired.

Kanade Tachibana (Angle Beats!) is a prime example of this power, she can participate in any fight against opponents while producing almost no fatigue toxins in her body.

Due to her infinite energy generator, Android 18 (Dragon Ball Series) can fight indefinitely without ever tiring or wearing down,...

...allowing her to overpower and defeat Vegeta.

Majin Buu (Dragon Ball series) has limitless stamina which, combined with his powerful regeneration, allows him to keep fighting at his peak indefinitely. 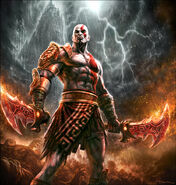 As long as his vengeance isn't fulfilled, Kratos (God of War) can perform limitless physical activities, relentlessly fighting colossal opponents and entire armies without ever tiring.

Thanos' (Marvel Comics) musculature produces almost no fatigue toxins during physical activity and as a result, he has limitless superhuman stamina in all physical activities.

Hercules (Marvel Comics) possesses virtually limitless stamina, allowing him to never get tired after any exertion.

Silver Surfer (Marvel Comics) The Surfer's highly enhanced musculature generates no fatigue toxins, body stress, or even sweat, granting him inexhaustible physical stamina, which allows him to fight other beings for prolonged periods of time before tiring, if he even gets tired.

As Magical Zombies, the Fork Maidens (New Blood Interactive's DUSK) are tireless, meaning they can fight within a battlefield without any semblance of fatigue, though can still get killed.

Because the Possessed Scarecrows (New Blood Interactive's DUSK) are inorganic in origin, it is impossible for them to get exhausted during intense battles until their opponents are defeated and/or killed.

Sakamaki Izayoi (Problem Children are Coming from Another World, Aren't They?) has exceptionally high power, because of this, as long as his opponent doesn't give up, he can continue to fight them with no signs of fatigue what so ever.

Due to their divine nature, The Minions of Set (Samurai Jack) possess a limitless amount of stamina and tireless bodies, allowing them to continue fighting and pursuing jack without the need for rest or sustenance.

Unlike the Powerpuff Girls, the Rowdyruff Boys' (The Powerpuff Girls) energy never wears down in battle. Instead, they continue fighting with no signs of needing rest.
Português do Brasil
Community content is available under CC-BY-SA unless otherwise noted.
Advertisement