The user is able to go toe-to-toe and even surpass the strongest of beings with nothing but the raw force of their physical blows. Any level of weight the user needs to lift or move is irrelevant as their body can emit limitless force that can repel an object of any mass.

With this ability, the user could travel massive distances in a single jump, unleash powerful strikes, obliterate entire massive life forms with one hit, cause destructive quakes by smashing the ground, shatter planets with their fists alone and even tear through space-time anomalies with the sheer force of their strength, etc. They are immune to powers that would manipulate, affect or rob them of their strength.

...and easily ripping Ares in half while under the influence of The Void.

When Ganondorf (The Legend of Zelda series) gained the Triforce of Power, his physical abilites, as well as mystical, were strengthened by the essence of the Goddess Din to god-like proportions, making him physically more powerful than any creature in the land of Hyrule. 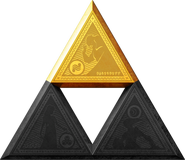 Khorne (Warhammer 40,000)
Add a photo to this gallery
Retrieved from "https://powerlisting.fandom.com/wiki/Peak_Human_Strength/Absolute?oldid=1212077"
Community content is available under CC-BY-SA unless otherwise noted.