Even without Venom, Bane (DC Comics) possesses strength as great as possible and is stronger than Batman.

Have strength superior over normal members of your race

"His breath can shatter boulders, with one swing he sinks mountains into the earth, the strongest man among men under the heavens. KAN MEI!!!!"
― Kan Mei Army (Kingdom)

"I shall teach you the true meaning of MIGHT."
― Mou Bu to Ri Haku of Defense (Kingdom)

The power/ability to be stronger than average humans even though their capabilities are not classified as 'enhanced'. Sub-power of Peak Human Condition.

Users' strength is at the maximum limit of human conditioning. They are capable of over-head lifting several times their own body weight (2 times at the minimum), up to a 800-1000 lbs level (about 360 to 500 kg) and bench-press up to 1,100 lbs - 1,500 lbs level (about 500 to 680 kg). They would be able to surpass feats of any Olympic class weightlifter, allowing them to lift objects on their own that would normally require multiple people, break thin chains or steel cuffs, bend metal bars, and break down doors with a single strike.

Offensively, the user is able to knock people out with one offensive impact, overpower multiple opponents, punch an enemy through a thin brick wall, lifting a full grown person in the air with one arm, and even throwing them several meters. For some users, their strength is strong enough to wrestle or even overpower wild animals such as large bears, gorillas, and possibly beings with superhuman strength.

Thanks to his Training Regimen and his bottomless hatred for Yoshiko Hanabatake, Akuru Akutsu (Aho Girl) gained near superhuman strength.

Bruce Wayne/Batman (DC Comics) represents the natural pinnacle of human physical prowess, which enables him to pull off feats like...

...smash a brick wall barehanded and split a tree with power kicks during his workout...

...give Solomon Grundy a bloody nose with a double punch to the face... 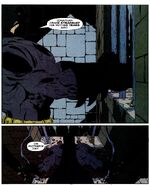 ...and throw Superman across a room. 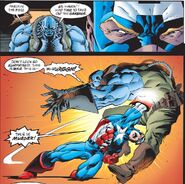 Wilson Fisk, the Kingpin's (Marvel Comics) body is composed almost entirely of muscle that has been developed to enormous size, much like a sumo wrestler, he possesses peak human strength with only the bare minimum actually being fat....

...easily Crushing his traitorous underling with his bare hands... 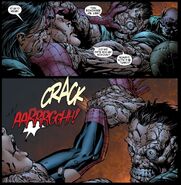 ...and break his back with ease.

Marv (Sin City) possessed an incredible level of strength that borders on the line of superhuman...

...knocking Wendy out with just a slap...

Aside from Winter Soldier's (Marvel Comics) Bionic Arm, his natural strength was enhanced to the peak of human potential. He shown feats like....

Shin of the Hi Shin Unit's (Kingdom) most prominent trait is his monstrous strength...

...fueled with rage over his best friend's death, he smash through a stone wall with his bare fist...

...lift and threw an armored Zhao soldier one handed.

Despite his skinny appearance, Rin Ko of the Four Heavenly Kings (Kingdom) was able to bend and break an iron spear just by swinging his blade.

Kei Sha, The Silent Hunter (Kingdom) possessed amazing strength which he applied through his Swordsmanship...

...breaking an iron spear with a Heavy Strike blow by swinging his sword.
哆啦A夢劇場版2016, 新·大雄的日本誕生 27277.jpg
Gian (Doraemon) is extremely strong despite being a obese child, he could do amazing physical feats which not even adult could do.

Mr. Sandman (Punch Out) quickly took the title of world champion and can demolish an entire building with his bare fists alone. 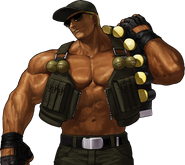 Clark Steel (King of Fighters series) is possibly one of the strongest fighters in King of Fighters thanks to his incredible strength that can help him lift up even large fighters like Chang Koehan (who is 668 lbs).

Archie Andrews (Riverdale) punches through solid ice to save Cheryl.
The Aberrants.png
Each Aberrant’s (TF2 Freak) strength is at a level a Human can achieve through intense training, and can possibly lift 800-1000 lbs or less, at least depending on how strong each Aberrant is.
Ghost Strength Showcase.png
Through intense training overtime, Ghost (TF2 Freak) is strong enough to beat back most opponents and handle the heaviest of weaponry, such as his Assault Cannon. He can also possibly bend metal bars with ease and break down crates with his bare fists.
Karate Scout Strength Showcase.gif
Karate Scout (TF2 Freak) can possibly not only bend metal bars, but he can also possibly lift heavier objects, karate chop and break a plank of wood with ease, as well as knock out normal Humans.
Lord DeGroot.png
Lord DeGroot's (TF2 Freak) strength is at a peak Human level, allowing him to wield his Horseless Headless Horseman's Headtaker with little muscle stress.
Add a photo to this gallery
Retrieved from "https://powerlisting.fandom.com/wiki/Peak_Human_Strength?oldid=1256405"
Community content is available under CC-BY-SA unless otherwise noted.