Lobo (DC Comics) can use his sense of smell to track targets across interstellar distances.

The power to track people and objects with one's basic senses.

The user can track others down easily via various means, ranging from scents to footprints. With enough experience, the user can follow tracks that are days or even weeks old. Some users may be able to reconstruct what has happened by sniffing around the area they are searching.

The Stand of Norisuke Higashikata IV, King Nothing (JoJo's Bizarre Adventure Part VIII: JoJolion) can track down anyone or anything based on the finest scent of said person or object.

The Nemesis-T Type (Resident Evil) is a highly competent and relentless tracker; never stopping nor failing in its pursuit, ever, until either it or its targets are utterly dead.

Terminators (Terminator) are designed to be unmatched in efficiently tracking down and killing any human targets given to them. 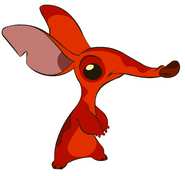 Bloodhound (Apex Legends) can track his opponents movements, activity and even by their spent ammo.
Add a photo to this gallery
Retrieved from "https://powerlisting.fandom.com/wiki/Peak_Human_Tracking/Enhanced?oldid=1648915"
Community content is available under CC-BY-SA unless otherwise noted.