Kōga Kuchiki (Bleach) implanting his spiritual pressure into his targets, altering their five sense perception as he pleases.

The ability to manipulate perception. Sub-power of Perspective Manipulation.

With a sufficient deal of control over this ability, it becomes possible to quickly and easily shape even complex “illusions” for others - to the point where even those who are aware of what is happening begin to doubt their own senses. There doesn’t seem to be any way to tell when this is being done, and as such there is no clear defense. Used on one's self, this power can render one effectively immune to any other form of illusion, as they would be able to perceive the underlying reality near-instantly. It is also a potent tool for gathering information, as it can be used to experience distant events, among other things.

Of course, although the illusions this creates can be made flawless, they are still only illusions, and thus cannot actually affect anything, although they may seem like they do. Being stabbed by an illusionary sword would still hurt, although it won’t actually kill.

Perception is what can consider the result of the combined experience of all of one's senses - the means by which someone is aware of the world around them. Manipulating perception is more than simply creating illusions. Rather, it is the act of directly changing an individual's ability to experience the world. From the basic senses such as sight and hearing, to those lesser known, such as proprioception or nociception, to the rare abilities to sense auras or magic - all of these senses together make up an individual's perception of the world, and manipulating it entails nothing less than restructuring the world as they are able to sense it.

Unlike regular illusion magic, which functions by creating some new form or sensation to be perceived, this acts directly on the mind of the target. As such, the illusions it creates are effectively flawless, barring some deliberate clue left by the wielder of the power. By shaping the way someone perceives the world, it’s possible to subtly alter what they can sense, adding, removing, or altering small details; or to go further and completely reshape how they sense the world, effectively trapping them in a perfectly detailed hallucination.

However, affecting others’ perceptions in such a way is but one use of this power. It can also be used to see through illusions, or even into the minds of others. Being that there is no difference between affecting your own perception or that of another, it can grant these abilities to anyone, for as long as the wielder is willing to apply the effort needed to maintain the effect.

Owing to the way this power functions, it isn’t something that can be easily overcome. Only incredibly powerful individuals, or those whose own abilities deal specifically with the senses, have any hope of overturning its effects. To everyone else, it becomes impossible to tell if anything they perceive is real, or merely something fabricated by this power.

Sōsuke Aizen (Bleach) using Kyōka Suigetsu to completely control all five sensory perceptions of anyone who falls victim to his Complete Hypnosis.

Shinji Hirako (Bleach) using Sakanade to reverse the direction of perception in every way of anyone caught within his Inverted World.

Shinji Hirako's (Bleach) Bankai, Sakashima Yokoshima Happōfusagari, reverses the perception of friend and foe of anyone within its area of effect.

Itachi Uchiha (Naruto) is so skilled with the Tsukuyomi that he can alter the victim's perception of time, torturing them for days worth in mere seconds. 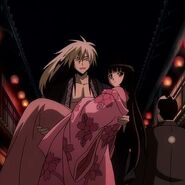 Nurarihyon (Nura: Rise of the Yokai Clan) can alter others' perceptions, allowing him and those with him to walk in the midst of crowds without being noticed.

Rikuo Nura (Nura: Rise of the Yokai Clan) using Kyōka Suigetsu to distort his opponents' perception of him, creating an illusion similar to an afterimage.

Unlike illusions, Visages (Planescape) are able to directly control anyone's perceptions using their power Lucidity Control, as such its impossible to tell whats truly real and whats not when fighting them
Add a photo to this gallery

Joe Schmo SCP-1504 (SCP Animation)
Add a photo to this gallery
Retrieved from "https://powerlisting.fandom.com/wiki/Perception_Manipulation?oldid=1602548"
Community content is available under CC-BY-SA unless otherwise noted.