The Little Ogre (Soul Eater) is the manifestation of the black blood in Soul's mind, goading him to give in to his inner madness.

Use the traits of personal demons.

"I've created a monster inside of my head, and it's eating me alive. I've created the demons I once believed in, to get me through the night. Facing every fear 'till my blood's cold, bigger than the ghosts that haunt my hopes."
― New Years Day - My Monsters

"Hey pal I have plenty of demons, get in line."
"Drunk!"
"Hey, I thought you were sloth?"
"Sloth can be drunk."
― Homer Simpson and his Inner Demons (The Simpsons)

The power to use the abilities of personal demons. Variation of Demon Physiology, Madness Embodiment and Mental Entity Physiology.

User with this ability either is or can transform into a personal demon, a being within a person's mind that personifies a specific event or trauma that person has experienced. Their existence is often to blame for whatever mental or emotional problems the person has. It is possible for them to manifest in the real world as hallucinations.

Fallen Hana (ME!ME!ME!) is Syu's personal demon who is hellbent on keeping him in his Otaku addiction and away from real life connections and relationships.

Due to his abuse as a child, Carl Stargher (The Cell) develops into a serial killer, his murderous impulses manifesting as a demonic version of himself within his mind.

Jangles the Clown (Inside Out) is a monstrous clown deep inside Riley's Subconscious, manifesting as an evil entity and is one of Riley's biggest fears.

Pizza Jenny (Steven Universe) is the manifestation of Kiki's sister Jenny in Kiki's mind and is the source of her recurring nightmares.

Personal Demons (Psychonauts) are common enemies in the astral plane.

Because of the trauma he put his son through, Oleander's Father (Psychonauts) manifests as a personal demon within his mind, and is the source for all of Oleander's evil behavior. 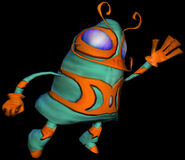 Kochamara (Psychonauts) is a mental broadcast from Oleander into Linda's mind as a means to control the monstrous lungfish.

Jasper Rolls (Psychonauts), also known as "The Phantom", is the source of Gloria's psychosis.

Dingo Inflagrante (Psychonauts) is based after the varsity cheerleader that stole his girlfriend, is one of the sources of Edgar's psychosis.

Lampita Pasionado (Psychonauts) is based off of his high school girlfriend, is one of the sources of Edgar's psychosis.

Because of the way he treats Razputin, Augustus Aquato (Psychonauts) manifests from his son's mind as a being who tries to kill him.

The Keeper (The Evil Within) is a manifestation of Ruben "Ruvik" Victoriano's rage at the theft of his files from his personal safe by Dr. Marcelo Jimenez, made real in the STEM mental-scape. 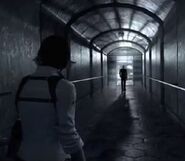 In order to keep Juli set on her mission, MOBIUS injected her with a serum that manifests in her mind as the Administrator (The Evil Within: The Assignment) a black, shadow-like entity that haunts her throughout her mission. 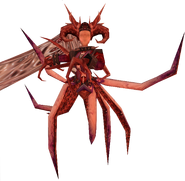 The Queen of Hearts (American McGee's Alice) is the manifestation of Alice's madness, made into her monstrous form after the death of Alice's family in the fire. 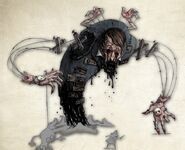 Dollmaker (Alice: Madness Returns) is the manifestation of Dr. Angus Bumby's influence on Alice and is the source of Alice's returning madness.

The Corrupting Blood (Castlevania Lords of Shadow 2) is the manifestation of the lonely castles haunting revenant that manifested the attributes of Gabriel's maddening bile and venomous hatred towards god in physical form, taking shape as Inner Dracula turning the castle itself against him to become whole with it's counterpart once again.

The Beast of Darkness (Berserk) is the manifestation of all of the rage and hatred in Guts's soul as a result of the hellish ordeal of the Eclipse, and his feelings of vengeance against Griffith and the God Hand for what they have done to him. The Beast wants Guts to throw his humanity away and become a monster like those he fights.

The DNA Voice (Elfen Lied) is the representation of Lucy's Diclonius instincts and killer instinct. It constantly urges Lucy to give into her rage and slaughter all of humanity for scorning and tormenting her.
Add a photo to this gallery
Retrieved from "https://powerlisting.fandom.com/wiki/Personal_Demon_Physiology?oldid=1529084"
Community content is available under CC-BY-SA unless otherwise noted.