"This is my home, Azazel; my place of power. This is the Heart of the Dreaming. Reality here conforms to my wishes; it is what I wish it to be-- no more, no less."
― Dream, The Sandman - Season of Mists

The power to rule over a certain realm. Technique of Personal Mastery. Not to be confused with Personal Dimension. Lesser form of Omniarch.

The user has a personal domain: an area in which the user has absolute power, through magical, supernatural, scientifically, or other means, which may be a physical area or an entire dimension. Some users may possess Omnipotence within their domains.

Like all Lord of Nightmares, Malekith (Anima: Beyond Fantasy) Prince of Crows, have complete control over one area of the Wake, controlling the city of Graven as if he were a god.

Doctor Kanzaki's (Black Cat) Warp World is his personal domain where he controls absolutely everything within.

Yukio (Bleach) can create a personal domain within his video game console via his Fullbring.

The Moon Presence (Bloodborne) is an eldritch entity that rules over the realm of Hunter's Dream, its features and denizens being under the control of it and its surrogates.

Road Kamelot (D.Gray-Man) has absolute control over her own dream dimension.

As the ruler of the Dreaming, Dream of the Endless (Vertigo/DC Comics) can create and reshape its contents however he wants.

Nakime (Demon Slayer: Kimetsu no Yaiba) manipulate and alter the Infinity Castle at will by simply strumming her biwa.

The Ascendent Hive (Destiny) have their own personal domains in which when ever they die, they return to that realm to recover and eventually return.

Diablo (Diablo) transporting the hero to his Realm of Terror.

Gargos (Killer Instinct) controls the Astral Plane and is at his most powerful when inside it.

Sunset Grace (Marvel Comics) has the ability to open a portal to another dimension where she has god-like control over all reality and events. 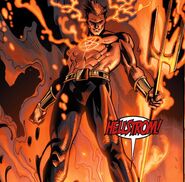 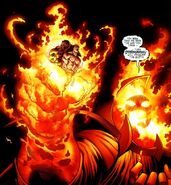 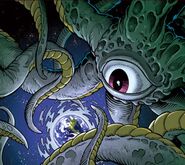 Dimentio (Super Paper Mario) has the ability to transport to his personal Dimension D.

...merging with the nature of the dimension, allowing her to control it to attack.

Peter Pan (Once Upon a Time) rules over Neverland with control of its resources and magical properties.

Inside his ROOM, Trafalgar D. Water Law (One Piece) has complete control over the displacement and orientations of all objects within.

Capone Bege (One Piece) has complete controls over the insides of his "castle" body.

Giolla (One Piece) could create a pocket dimension in which she has complete control of the abstract art within.

SCP-106 - The Old Man (SCP Foundation) essentially has omnipotence in its own pocket dimension which allows for full control of time, space, and perception inside his dimension, obtaining a form of omnipresence.

The Crystal Gems (Steven Universe) possess complete control over the metaphysical properties of the Temple.

Sardonyx (Steven Universe) has full control over the contents of her room within the Crystal Temple.

After leveling up in the Demon Castle quest, Sung Jin-Woo (Solo Leveling) obtained his Monarch's Domain ability which increases the strength of his Shadow Soldiers by +50%.

EMIYA (TYPE-MOON) can project his personal reality upon the rest of the world in the form of Unlimited Blade Works, a landscape where a copy of every sword he has ever seen is resting and available for him to use.

Wall Demon (Valkyrie Crusade) has her own personal domain and dimension/space inside her wall.