The power to manipulate one's personal gravitational field. Sub-power of Gravity Manipulation. Technique of Personal Mastery. Opposite to Personal Anti-Gravity.

Advanced users can create a gravitational force-field around them selves like a tactile telekinetic field to repel all manner of attacks, by increasing personal gravity at extreme levels users are capable of supersonic flight, amplify physical strength, anchor themselves to the ground and potentially granting immunity or high resistance to other gravity manipulators. 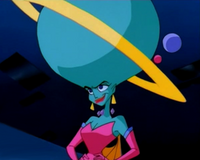 Superman (DC Comics) can independently operate his own gravity field at will, taking advantage of Earth's weaker gravity to propel himself through the skies and even beyond the planet's atmosphere.

Bluenote Stinger (Fairy Tail) can casually or passively alter his own gravity.

Frederick Dukes/Blob (Marvel Comics)
Add a photo to this gallery
Retrieved from "https://powerlisting.fandom.com/wiki/Personal_Gravity?oldid=1605866"
Community content is available under CC-BY-SA unless otherwise noted.