"You do not understand the Pestilence? Even after all this time? Doctor, it is an unspeakable horror, one that has shown its true face many times before and will again. I find myself blessed with the wisdom and good senses needed to root it out and destroy it, but many like yourself cannot. It is a cruel judgement, I fear, to be at the mercy of a disease you cannot fully comprehend."
― SCP-049, discussing the pestilence to Dr. Hamm. (SCP Foundation)

The power to manipulate pestilence. Advanced version of Disease Manipulation.

The user can create, shape, and manipulate pestilence, including pests, locusts that spoil crops, and flies that carry disease. They gain immunity to pests and viruses, but can also create, invoke, and control diseases and viruses. 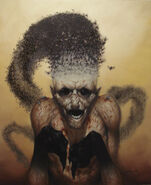 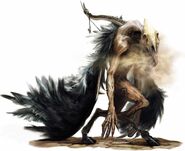 A scene devastated by diseases and pests

Nurgle (Warhammer 40k) also known as the Plague Lord, is the Chaos God of Disease, Decay, and Destruction.

Flu (Valkyrie Crusade) the demon of disease and plague.
Add a photo to this gallery
Retrieved from "https://powerlisting.fandom.com/wiki/Pestilence_Manipulation?oldid=1639061"
Community content is available under CC-BY-SA unless otherwise noted.