Temen-ni-gru (Devil May Cry 3) the demonic structure built by malevolent cultists who worshiped hell & its denizens.

User can create immaterial/otherworldly structures/environments, including buildings and vehicles or make existing such edifices transform into them at will.

Naraku (Inuyasha) is an infamous user of the power.

Mard Geer's (Fairy Tail) Curse can transform his guild's base into a monstrous hell beast. 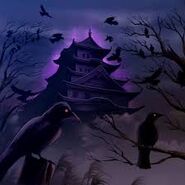 Oni Island (Okami) a demonic fortress manned by the evil Nine Tails and it's army of demons.

The Silent Mary (Pirates of the Carribean: Dead Men Tell No Tales) captained by the revengeful Salazar, is a lethal ghostly vessel able to bite down on other ships as well as reanimate dead sea life to do its masters bidding.

Ouroboros (Megaman ZX Advent) the malefic culmination of a clustered set of biometal model W's containing the evil soul and will of Dr. Wiel in the form of a super advanced techno-organic albatross.
Add a photo to this gallery
Retrieved from "https://powerlisting.fandom.com/wiki/Phantasm_Dwelling_Creation?oldid=1375608"
Community content is available under CC-BY-SA unless otherwise noted.