Upon becoming an Offscouring, Hijikata Toshizo (Drifters) can use smoke to manipulate and command spirits of dead former soldiers to fight on his behalf

Manipulate ghosts/specters and their energies

The power to manipulate ghosts and ghost energies. Sub-power of Soul Manipulation. Variation of Shamanism and Ectoplasm Manipulation.

The users of this power are able to commune with other worldly spirits and control them and their energies to any extent. They can induce fear into the hearts of others, use spirits to cause great chaos and control the souls of others when they are dead.

Airi (Queen's Blade) is a powerful wraith whom can cast ghastly illusions on her opponents. 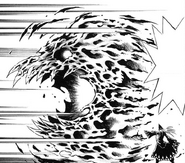 Belgim E.O and Dalia (Zatch Bell!) are a powerful mamodo team whose spells focus mostly on the manipulation of ghosts.
ShandortheArchitectprofile.png
Ivo Shandor (Ghostbusters) leader of the Cult of Gozer had enough infreastructural and supernatural expertise that he could call forth and command a legion of vengeful poltergeists from beyond.
Add a photo to this gallery
Retrieved from "https://powerlisting.fandom.com/wiki/Phantasm_Manipulation?oldid=846242"
Community content is available under CC-BY-SA unless otherwise noted.