Kagutsuchi (Shin Megami Tensei) is a being that can shape the world according to the reason of the one who defeats him.

The power to materialize a specific philosophical point of view from the metaphysical realm to the material realm. Sub-power of Reality Warping and Philosophy-Based Powers.

User can shape reality according to their view of what it means to them (Note that this page will only contain the firm beliefs born inside a determined school of thought, and not the essence of the schools themselves). 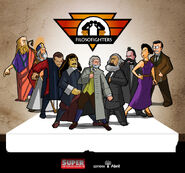 The Philosophers (Filosofighters) possess such abilities.