Admiral Borsalino/Kizaru (One Piece) can use his Pika Pika no Mi abilities to increase the speed of his kicks to light-speed levels.

The power to fuse light and physical combat. Technique of Light Manipulation and a variation of Elemental Combat. Opposite power of Umbrakinetic Combat.

The user can use light in their physical combat, making their attacks extremely fast, mixing precision strikes with broader effects and unpredictability.

Beowulf (Devil May Cry 3: Dante's Awakening) is a demon that possesses overwhelming strength and a variety of light attacks. 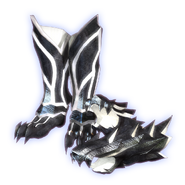 The Beowulf armor set (Devil May Cry 3) focuses on close range but powerful attacks. Those who wield them gain an increase in both speed and power and are able to use light based attacks. 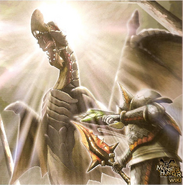 The Gypceros (Monster Hunter) using its head crest can immobilize hunters with a blinding light.

Loke (Fairy Tail) use his magic "Regulus" to empower his physical attacks with wakes of destructive light
Add a photo to this gallery
Retrieved from "https://powerlisting.fandom.com/wiki/Photokinetic_Combat?oldid=581068"
Community content is available under CC-BY-SA unless otherwise noted.