Yukihina (Code:Breaker) converting the ice that Houkabe is composed of into vapor, which has an expansion ratio of 1000, brutally blowing him apart.

The user can cause phreatic explosions via evaporation or sublimation of liquid or solid at a very rapid rate, turning it into vapor. The sudden conversion of a liquid to its gaseous state will cause it to take up more volume due to its expansion ratio, which will increase in pressure, causing the containing vessel to rupture explosively.

Kuro (Karakuri) injecting vaporized liquid methane into his target, which has an expansion ratio of 630, causing them to blow open.

Gengetsu Hōzuki (Naruto) creating a water clone with a oil-layer, which will heat up from exertion, causing the water to boil until it explodes.

Volcanion (Pokémon) launching its pressurized steam with such explosive force it can blow away a mountain. 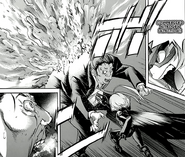 Bronco Mask (Trash) injecting vaporized liquid nitrogen into her target, which has an expansion ratio of 800, causing a violent explosion.
Add a photo to this gallery
Retrieved from "https://powerlisting.fandom.com/wiki/Phreatic_Explosion_Inducement?oldid=1272433"
Community content is available under CC-BY-SA unless otherwise noted.