The user can distort the laws of physics to alter the fabric of reality particularly according to their ability to perform this feat. By distorting the law of physics they can warp reality, control logic and reason, tear apart the fabric of universe to cause a bizarre occurrences or what warped reality they choose to occur, etc.

Idol (Tenchi Muyo GXP) ignoring the laws of physics by pulling a ship out of hyperspace from normal space.

Kakine Teitoku (Toaru Majutsu no Index) Dark Matter never existed until it was created by Kakine himself, it defies the laws of physics such as deflecting the sunlight and aiming it as a deadly light ray. 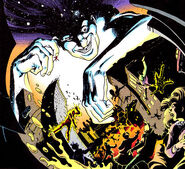