Dr. Manhattan (Watchmen) is powered by physical forces and literally made of them.

Be made out of physical forces.

The power to be powered by physical forces and composed out of them. Variation of Science Attuned Physiology and Superpowered Physiology.

The user is powered and made out of scientific energy. The user also has full control over their physiology due to this fact. Due to fact the user is an energy being they may accomplish transcendence by applying or absorbing divine or large amounts of energy. 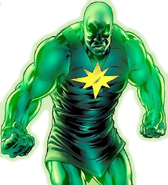