Trap others in pictures.
The power to trap other beings in paintings and pictures. Technique of Paint Manipulation. Variation of Binding.

The user can create pocket dimensions within paintings and other pictures to imprison targets.

A person is trapped in Vklav's collage (Charmed)

After being possessed by an Isolus, Chloe Webber (Doctor Who) gained the ability to imprison people, animals and objects by drawing them. 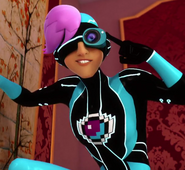 Pixelator (Miraculous: Tales of Ladybug & Cat Noir) can imprison others in his photo gallery by shooting them with his camera.

Alcazar (Sofia the First/Elena of Avalor) placed Isabel, Francisco, and Luisa inside an enchanted painting.
Add a photo to this gallery
Retrieved from "https://powerlisting.fandom.com/wiki/Picture_Imprisonment?oldid=1516898"
Community content is available under CC-BY-SA unless otherwise noted.