User can create, shape and manipulate pipes, shaping and combining them as needed, or moving them with telekinesis. 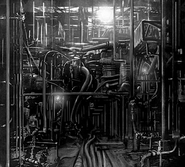 If someone is carrying tools, resorting to violence, or trying to damage or repair SCP-015 - Pipe Nightmare (SCP Foundation), the pipes will burst and spray them until they manage to escape or die.
Add a photo to this gallery
Retrieved from "https://powerlisting.fandom.com/wiki/Pipe_Manipulation?oldid=1506434"
Community content is available under CC-BY-SA unless otherwise noted.