The power to merge into/with the planet. Sub-power of Planetary Manipulation. Variation of Solid Merging. Not to be confused with Planetary Parasitism.

User can merge into/with any planet or planetary body, allowing them to move within the planet as well as manipulate the planet and anything connected to it as if it was part of their own body.

In the 853rd century, the Martian Manhunter (DC Comics) has become one with the planet Mars.

In his Meta-Rilldo form, General Rilldo (Dragon Ball GT) has absolute control over the machine planet of M-2, effectively making him one with it.

After undergoing a Dark Evolution courtesy of the Dark Dragon Ball, Lord Slug (Dragon Ball Heroes) merged with the Earth itself.

Moro (Dragon Ball Super) has merged with the Earth in a final attempt to defeat Goku.

Sephiroth (Final Fantasy VII) attempted, and nearly succeeded, at merging with the planet Gaia as part of his plan to achieve godlike power.

Aurora Unit 313 (Metroid Prime 3: Corruption) has become one with the sentient planet Phaaze.

Cosmo (Sonic X) transformed into a tree and fused with Planet Aqurius to weakened Final Mova. 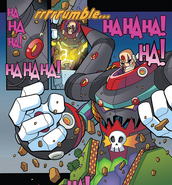 In his Sigma-2 form, Sigma (Sonic & Mega Man: Worlds Unite) is merged with the Lost Hex planetoid.
Add a photo to this gallery
Retrieved from "https://powerlisting.fandom.com/wiki/Planetary_Merging?oldid=1725456"
Community content is available under CC-BY-SA unless otherwise noted.