Possess a symbiotic relationship with a planet.

The power to gain powers through a symbiotic relationship with a planet/planetary body. Variation of Symbiosis and Universal Force Symbiosis.

The user can gain powers through a symbiotic relationship with a planet/planetary body. The host usually absorbs the energy of the planet or planetary embodiment and uses it to enhance their abilities and/or wield supernatural powers. While it may be impossible to play vessel to an actual planet, one can house its essence for the user’s benefit, allowing for energy, elemental and matter manipulation powers based on the planet’s nature. Because of the symbiotic relationship between host and planet, both can benefit/suffer from each other’s state of being.

Gaia (Captain Planet and the Planeteers) gains power from and protects Earth and suffers as Earth is damaged. 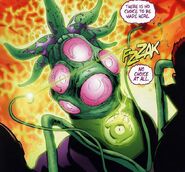 Minerva (Final Fantasy VII)
Add a photo to this gallery
Retrieved from "https://powerlisting.fandom.com/wiki/Planetary_Symbiosis?oldid=1456029"
Community content is available under CC-BY-SA unless otherwise noted.