On planet plasma is relatively rare, but it is present in electricity (lightning, St. Elmo's fire, ball-lightning), extremely hot flames and polar aurora, or artificially in low energy lights, electric arcs of all kinds, etc.. In space, plasma is the most common state for ordinary matter, most of which is in between and in suns and stars.

Starfire (DC Comics) absorbing ultraviolet radiation from the sun and releasing them as "Starbolts".

The Lantern Corps (DC Comics) can access and manipulate multitudinous emotional plasmoid phenomena through the manipulation of the Emotional Spectrum of the universe. 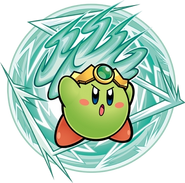 Shego (Kim Possible) can use her plasma in various ways.

Starchild Kiss (Scooby-Doo! and Kiss: Rock and Roll Mystery)
Add a photo to this gallery
Retrieved from "https://powerlisting.fandom.com/wiki/Plasma_Manipulation?oldid=1329521"
Community content is available under CC-BY-SA unless otherwise noted.