The ability to wield or create weapons using plasma. Variation of Power Weaponry.

User can to create or wield weaponry with power over plasma, which grants the user a wide variety of plasma-based abilities, including use of superheated and supercooled plasma. This ability is not only specific to mystic weapons, but also technologically advanced weapons. The power of the weapons depends on what they were created for or what level of plasma-based ability they possess, including if it involves other forms of ionized substances. 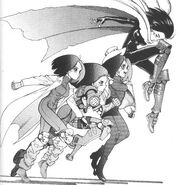 Although they tend to be called "lasers", energy weapons such as Blasters (Star Wars) function by firing high-temperature plasma bolts.
Add a photo to this gallery
Retrieved from "https://powerlisting.fandom.com/wiki/Plasma_Weaponry?oldid=1568846"
Community content is available under CC-BY-SA unless otherwise noted.