Starfox/Eros (Marvel Comics) can stimulate the pleasure centers of the brain, and shares his gift rather generously.

User can induce pleasure, a mental state that humans and other beings experience as positive, enjoyable, or worth seeking, by stimulating the pleasure centers of another. It includes more specific mental states such as happiness, entertainment, enjoyment, ecstasy, and euphoria. They can cause mental, spiritual, physical, social, sexual, etc. pleasure, from simple happiness to full-blown ecstasy. 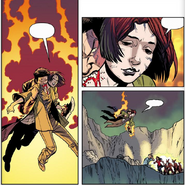 Vampire bites (Buffy the Vampire Slayer) stimulate the victim's pleasure receptors, which Angel uses to his advantage to calm down a rampaging Dark Willow.

Larcade Dragneel's (Fairy Tail) magic induces immense pleasure to the point that they die in agony.
Add a photo to this gallery
Retrieved from "https://powerlisting.fandom.com/wiki/Pleasure_Inducement?oldid=1399712"
Community content is available under CC-BY-SA unless otherwise noted.