Plutonium Man (DC Comics), made of living plutonium, is capable of using his namesake element to deadly effect.

The power to manipulate plutonium. Variation of Metal Manipulation and Periodic Table Powers.

The user can create, shape and manipulate plutonium, a brittle metal with bright silvery appearance, but it oxidizes very quickly to a dull gray, although yellow and olive green are also reported. Unlike most metals, it is not a good conductor of heat or electricity. It has a low melting point (640 °C) and an unusually high boiling point (3,228 °C).

Both plutonium-239 and plutonium-241 are fissile/can sustain a nuclear chain reaction, leading to applications in nuclear weapons and nuclear reactors. Plutonium-240 has a high rate of spontaneous fission, raising the neutron flux of any sample containing it, limiting the usability for weapons/quality as reactor fuel. Plutonium-238 emits alpha particles and is a heat source in radioisotope thermoelectric generators, which are used to power some spacecraft. 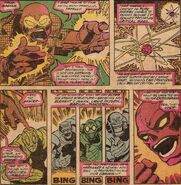 The Plutonium Man (DC Comics) showing the extent of his power.
Add a photo to this gallery
Retrieved from "https://powerlisting.fandom.com/wiki/Plutonium_Manipulation?oldid=1272003"
Community content is available under CC-BY-SA unless otherwise noted.