Shizune (Naruto) is adept in using poisoned senbon needles through her wrist-mounted senbon launcher and other methods.

The ability to use poisonous abilities by using ranged weapons as conduits. Variation of Power Artillery.

The user can use various ranged weaponry such as slingshots, bows, guns, cannons etc, as a conduit for poisonous substances/powers or impose those effects on ranged weapons to enhance them. 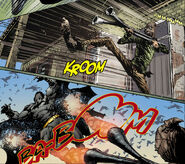 Some of the biomorphs of the Tyranids (Warhammer 40,000) are poisonous.

Muta (Kingdom) takes great pride in his poison.
Add a photo to this gallery
Retrieved from "https://powerlisting.fandom.com/wiki/Poison_Artillery?oldid=1398291"
Community content is available under CC-BY-SA unless otherwise noted.