"'How would you describe your condition?" I asked. Isabel didn't respond. Instead, her eyes landed on a wasp, possibly the same one that had been buzzing in my ear earlier. Isabel turned her chin slightly in its direction. She blew out as if extinguishing a candle flame. For a split-second the wasp hovered in the air. Then it dropped dead to the ground."
― Lucas, A Fierce and Subtle Poison

The ability to generate from within oneself poison and release them from the mouth. Sub-power of Poison Attacks. Variation of Biological Breath.

The user is able to generate and manipulate poison within them in a way that allows them to shape the exhaling of the effect. These shapes can include bursts, streams, spheres, even a mist of it from the mouth.

Poison Ivy (DC Comics) is a user of the ability as well. 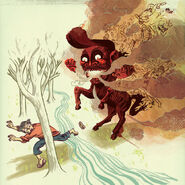 The Nuckelavee (Celtic Folklore) causes illness to all life with it's poisonous breath.

Shock Troopers (Half-Life: Opposing Force) can spit toxic slime balls into their hands and throw them like grenades that explode into a toxic shower, poisoning nearby opponents.

In his demonic form, Dale (Nanatsu no Taizai) using Despair Venom to spit a corrosive venom onto its target enemies.

Hanzo and Ibuse the Salamander (Naruto) is infamous for this ability.

Shizune (Naruto) breathing out her Poison Mist, which is fatal if even one whiff is taken in.

Poison (Valkyrie Crusade)
Add a photo to this gallery
Retrieved from "https://powerlisting.fandom.com/wiki/Poison_Breath?oldid=1329023"
Community content is available under CC-BY-SA unless otherwise noted.