The power to create/generate a variety of poisons. Sub-power of Poison Manipulation. Variation of Organic Generation.

User can generate, create, emit, or otherwise produce poison/poisonous substance and somehow inflict the victim. For the sake of clarity: poison, toxin, and venom are terms for any substance that injures the health or destroys life when absorbed into the system: poison is the general word, toxin is a poison produced by an organism (plant, fungus, animal); it is especially used in medicine in reference to disease-causing bacterial secretions, venom is especially used of the poisons secreted by certain animals, usually injected by bite or sting.

Poison can be spread by:

Slitherwings (How To Train Your Dragon) secretes venom from their mouths and skin. The toxic substance that the Slitherwing secretes on its skin to coat its entire body, protecting them from a Death Song amber attack and deliver their toxic quickly through their victims through any means of skin-to-skin contact.

Megatox (Sonic the Comic) is composed of Mega Mack, a toxic pink chemical specifically designed to kill Sonic the Hedgehog, and can manipulate the substance at will.

Shadow Mario (Mario) can use his Magic Paintbrush to produce toxic goo. 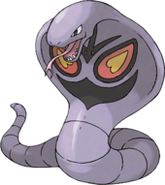 Arbok (Pokémon) is one of many Poison-type Pokémon.

Butterfree (Pokémon) can use the move "Poison Powder". 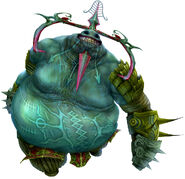 Cuchulainn the impure (Final Fantasy) is the embodiment of poison, his body is made of nothing but poison and corruption, wherever he walks all life withers and dies 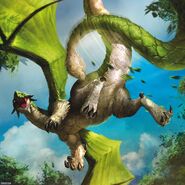 Tabbukkuki/Earth Dragons (Combat of Giants) can poison their opponents after using an Earth gem.