The power to use poison-related magic. Form of Magic. Variation of Poison Manipulation and Organic Magic. Not to be confused with Disease Magic.

The user is able to use a form of magic that controls venoms and poisons. This magic can augment, create, spread, or even weaken and eliminate poisons. 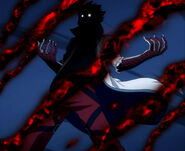 Norgorber (Pathfinder) Reaper of Reputation, Father Skinsaw, The Gray Master, Blackfingers.
Add a photo to this gallery
Retrieved from "https://powerlisting.fandom.com/wiki/Poison_Magic?oldid=1355909"
Community content is available under CC-BY-SA unless otherwise noted.