"Poison is a tried and true weapon when it comes to efficiently killing humans."
― Sei Kai (Kingdom)

The power to create weapons from poison. Sub-power of Toxikinetic Constructs. Variation of Organic Weaponry. Not to be confused with Toxic Weaponry.

User can create poison weapons from nothing or by shaping the existing poisons, they are capable of creating virtually any weapon and how many they wish. Depending on what organic material the weapon is made of, it can possess a variety of abilities and be very effective in both offensive and defensive combat.

The Poison Blade (Assassin's Creed series) variation of the Hidden Blade, used to administer poison, circa the 15th and 16th centuries CE.

Ull and his tribe the Udam (Far Cry Primal) utilize toxic materials in their weaponry.

The privateer sword of Hector Barbossa (Pirates of the Caribbean: On Stranger Tides) makes use of toxins from the poison dart frog. 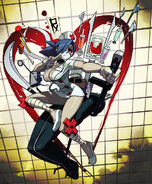 Nurse Valentine (Skullgirls) utilizes a fair amount of poisons in her arsenal.

The Yuuzhan Vong use venomous bio-weapons like amphistaffs (Star Wars Legends) to attack their foes.

A Dark Elf Khainite Assassin (Warhammer Fantasy), practitioner of the Way of the Poisoned Sword, attacking a High Elf.

Hanzo the Salamander (Naruto), utilized his own lethal poison to coat his sickle. The poison was strong enough to fell many in combat.
Add a photo to this gallery
Retrieved from "https://powerlisting.fandom.com/wiki/Poison_Weaponry?oldid=1547767"
Community content is available under CC-BY-SA unless otherwise noted.