Medusa (Clash Of the Titans) is said to have highly corrosive and poisonous blood.

Have blood that contains toxic substances.

The power to have blood which contains toxic substances. Combination of Poison Generation and Blood Generation. Variation of Blood Property Manipulation and Poisonous Bodily Fluids.

The user has poisons in their blood which the user can use against their opponent or when threatened. They can choose to release their poisonous blood when physically cutting themselves to ooze of their blood. If someone were to touch via skin contact or inhale the smell of this blood, the person will severely damage their internal organs and literally causes skin to be infected.

Because of all the Kryptonine that Rhea (Supergirl) had, prologue exposure made it infused in her bloodstream is a lethal weapon against a Kryptonian she is in a fight with.

Saya Otonashi's (Blood+) blood is fatally toxic to any chiropteran created by her twin sister Diva, as well as Diva herself...

...causing their own blood and bodies to crystallize.

On the other side, Diva's (Blood+) blood is fatally toxic to Saya herself and any chiropteran she creates.

Kaiju (Pacific Rim) have highly toxic blood called "Kaiju Blue" that can damage everything from humans to the earth and even keratin, is toxic in both liquid and gas form.

Utsuro's (Gintama) immortal blood can sustain mortals from even fatalist of injuries, but it is also unstably poisonous in mortal flesh, causing it to deteriorate slowly but surely...

...as the Tendoshu have corroded so horrifically and painfully, yet ironically cannot die as the blood still sustains them until their bodies completely rot to dust.

The Joker's (DC Comics) blood is so toxic that mosquitoes who bite him choke on it.

The Leviathan Edgar (Supernatural) injects an angel with his own toxic blood. 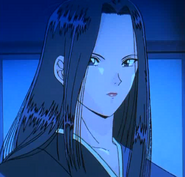