Malus Sceleris (Ravenloft) can create any monster from the pollution of his domain.

The ability to create beings of pollution or shape it into certain shapes. Sub-power of Pollution Manipulation. Variation of Entity Creation.

User is able to create beings of pollution, such as sludge, smog, trash, and broken machines, or shape existing pollution into wanted shapes and purposes. They can grant the beings varying levels of independence (controlled, automatons/programmed, semi-independent) and existence (momentary to permanent) and delete the creature once they are done with them. With a wide range of materials, these creatures are capable of working in the most hazardous areas known to humans.

Shadow Mario (Super Mario Sunshine) can use his Magic Paintbrush to create creatures of pollution... 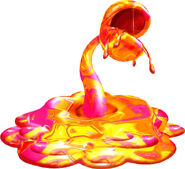 ...such as Polluted Piranhas...

...and Goobles.
Add a photo to this gallery
Retrieved from "https://powerlisting.fandom.com/wiki/Pollution_Creature_Creation?oldid=1557996"
Community content is available under CC-BY-SA unless otherwise noted.