"Sorry kid, but you're MY puppet now!"
― Bill Cipher while inside Dipper Pines (Gravity Falls)

"A fruit loop would not have been able to make his first million with a series of invisible burglaries! A fruit loop would never have thought to overshadow enough millionaires to become one of the richest men on the planet! I AM NOT A FRUTT LOOP!"
― Vlad Masters/Plasmius's response to Danny calling him a fruit loop for spying on him (Danny Phantom)

The power to inhabit the body of a living being. Opposite to Exorcism.

User can inhabit or take over the body of any living being, whether sentient or not, by stealing their motor functions and senses. Users may or may not have to leave their own body for this to take place. Disembodied users such as spirits may use the body as their own.

World (Foster's Home for Imaginary Friends) has the ability to possess objects. 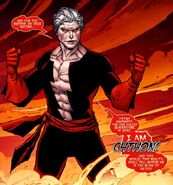 The ancient sith Karness Muur (Star Wars Legends) used the Force to seal his soul in the Muur Talisman before his first death, allowing him to possess anyone who wore it so long as their will wasn't strong enough to resist his own, as was the case with his longest host, Celeste Morne.

Following his death on Mustafar, Lord Momin's (Star Wars) essence inhabited his mask, allowing him to possess anyone who wears it, including an Imperial lieutenant...

...and his own resurrected body.

The Transcendent Naphalem Genesis (Vertigo Comics) possessed Reverend Jesse Custer during his last sermon, causing a massive explosion that killed everyone inside the church except for Jesse, who emerged from the demolished building without a single injury. 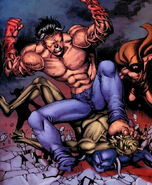 Ash Williams (The Evil Dead) being possessed by the spirit of the Necronomicon, turning him into a Deadite.

Wanderer (The Host), an alien "Soul" is put into the human body of Melanie Styrider for information on the where about of other humans who haven't be inseminated by the "souls".
Add a photo to this gallery 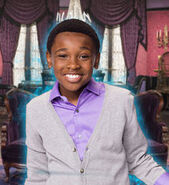 ....but because Nick is not his true vessel, his body decayed from Lucifer's sheer power...

...later possessing Castiel's vessel.
Add a photo to this gallery 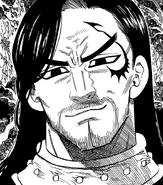 Dimple(Mob Psycho 100) possessing Mob to defend the child's body and do some sick flips.
Add a photo to this gallery

True to its name, SCP-035 - Possessive Mask (SCP Foundation) can possess its wearer.
Add a photo to this gallery 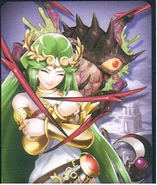 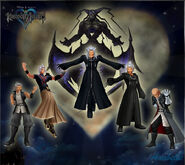 Master Xehanort (Kingdom Hearts) can possess others by overcoming the darkness in their hearts.This has created multiple versions of himself.
Add a photo to this gallery

SCP-035 Possessive Mask (SCP Animation)
Add a photo to this gallery
Retrieved from "https://powerlisting.fandom.com/wiki/Possession?oldid=1663357"
Community content is available under CC-BY-SA unless otherwise noted.