Collectors (Mass Effect) can be possessed by the Reaper Harbinger, turning them from normal mooks into dangerous threats.

The ability to gain or enhance powers through channeling or possession via themselves. Sub-power to Possessive Teleportation. Combination of Possession and Power Bestowal.

User can gain or enhance powers through channeling or willful possession of another being, gaining a array of abilities ranging from powers, skills, and possibly memories from the being they are possessed by at the current time, giving them a edge in a majority of situations.

Beings the user can channel or get possessed by can range from spirits, ghosts, demons, angels, gods, to even aliens and alternate selves. Regardless of what may the user be possessed by or channeling, they will gain some benefit and strength from the beings they are able to interact with. 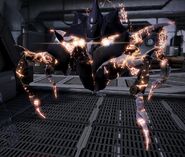 Mirajane, Elfman, and Lisanna Strauss (Fairy Tail) specialize in the use of Take Over magic, which works similar to this but with monster and demon souls...

Abigail Williams (Murdered: Soul Suspect) bestows all those she possesses to act as the Bell Killer with superhuman strength. 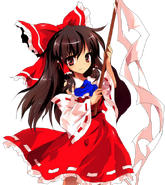 Shrine Maidens like Reimu (Touhou) are said to be able to do this, though it's only been seen in Silent Sinner in Blue, and with gods rather than spirits.

While in his parasitic demon form, Jason Voorhees (Friday the 13th) bestows his current host with his trademark superhuman strength, stamina, and durability.
Add a photo to this gallery
Retrieved from "https://powerlisting.fandom.com/wiki/Possessive_Enhancement?oldid=1415299"
Community content is available under CC-BY-SA unless otherwise noted.