The ability to create beverages that can result in magical effects. Variation of Powerful Objects, Magic and Alchemy.

ChuChus (The Legend of Zelda series) are the basic ingredients needed to create various potions. 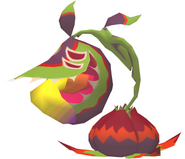 The Boko Baba plant (The Legend of Zelda: The Wind Waker), carries a Boko Baba Seed which can be brewed into making a health and magic replenishing potion in 4 are collected.

Killing Red Chus will give you Red Chu Jelly that can be brewed into Red Potions (The Legend of Zelda: The Wind Waker) which can replenish one's health. 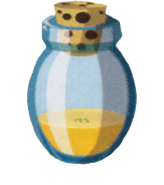 The Elixir Soup (The Legend of Zelda: The Wind Waker) was given to Link by his grandmother. It restores health and magic, as well as double his attack power.

Zecora (My Little Pony Friendship is Magic)
Add a photo to this gallery
Retrieved from "https://powerlisting.fandom.com/wiki/Potion_Creation?oldid=1033964"
Community content is available under CC-BY-SA unless otherwise noted.