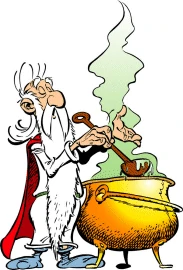 Zecora (My Little Pony: Friendship is Magic), skilled herbalist who is able to brew many kinds of potions.
Latest-46.jpeg
Pop Fizz (Skylanders)

The potion of the Fruit of the Previous Life was a potion made by Suzuki (YuYu Hakusho) that has ability to revert the drinker to their younger years.