An object that boosts the user's power(s). Variation of Powers Via Object.

User has access to objects that boost user's power. 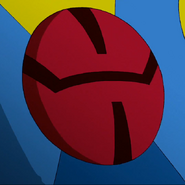 Keystone of Bezel (Ben 10) increases all of the natural powers, abilities, and skills of the possessor, and increases the power of the charms tenfold.

Even a single shard of the Shikon Jewel (InuYasha) can greatly enhance the user's powers.

The Double Gear System, (Mega Man 11) is device developed by Dr. Wily. The Power Gear and Speed Gear of the device were able to give the robots who use them "unstoppable power and insurmountable speed".

The Chaos Emeralds (Sonic the Hedgehog) are able to empower beings when all of them are collected. 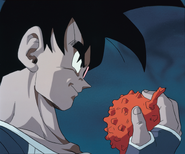 Turles (Dragon Ball Z) holding a fruit of the Tree of Might. 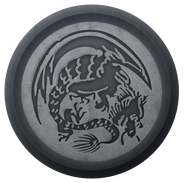 The Death Totem (Arrowverse/DC Comics) can act as a power booster for dark magic.

With the Rarity of a B class weapon, Knight Killer (Solo Leveling) is a fairly powerful dagger that provides an attack bonus of +75 damage...

...and offers a +25% damage to heavily armored enemies.

With the Rarity of an A class weapon, Baruka's Dagger (Solo Leveling) is the third most powerful dagger type weapon within Sung Jin-Woo's arsenal, having an attack of +110 and +10 agility...

Witchblade (Witchblade anime) can boost the power if it's the bearer, even enter the second stage of power of incredible power and brute force.

Cloneblades (Witchblade anime) are inferior copies of the Witchblade having similar power boosting abilities to their bearer.
Add a photo to this gallery
Retrieved from "https://powerlisting.fandom.com/wiki/Power-Boosting_Object?oldid=1571054"
Community content is available under CC-BY-SA unless otherwise noted.