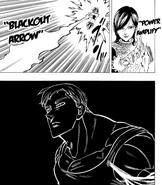 Trigger (My Hero Academia) is a drug that enhances the quirks of individuals at the expense of their capacity to reason.
Add a photo to this gallery
Retrieved from "https://powerlisting.fandom.com/wiki/Power_Augmentation?oldid=950950"
Community content is available under CC-BY-SA unless otherwise noted.