The ability to bestow powers upon another. Opposite to Power Erasure.

Cassandra Igarashi/Urdr (The Wicked + The Divine) was able to bestow her friends powers similar to herself along with a shared hive-mind, collectively becoming the Norns.
Add a photo to this gallery

Yhwach (Bleach) can grant unique powers by engraving a letter, signifying an ability, directly onto another's soul.
Hogyoku.jpg
The Hōgyoku (Bleach) can manifest a person's desires and potential, granting them powers.

Devil Fruits (One Piece) can grant whoever consumes them a unique, life-long power, at the cost of no longer being able to swim.
Jojo Bow&ArrowAV.png
The Bow and Arrow (JoJo's Bizarre Adventure) have the ability to grant a stand to whoever the arrow pierces. However, the arrow must deem the subject "worthy".

Enrico Pucci's Stand, Whitesnake (Jojo's Bizarre Adventure) can remove the Stands of others, storing them in discs. It also makes it able to bestowal these Stands upon others by inserting the discs on them.

Esdeath (Akame ga Kill) gained the power to manipulate ice from her Teigu Demon's Extract.
All Might.jpg
All Might (My Hero Academia) had his Quirk, One For All, passed down to him from his predecessor and he passed it on to his successor, Izuku Midoriya. 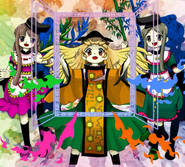 Harimon (Krystalia) has the power to bestow powers to others using the power of his red stones.
Add a photo to this gallery
Retrieved from "https://powerlisting.fandom.com/wiki/Power_Bestowal?oldid=1248760"
Community content is available under CC-BY-SA unless otherwise noted.