The user can weaken the powers of others, making targets' powers less of a threat against the user. Users cannot steal or give power, only weaken the ones their targets already have. 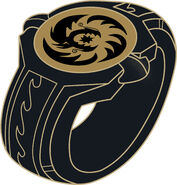 The Ring of Nine Dragons (Xiaolin Showdown) can split the user into nine duplicates of themselves, but the user's abilities become weaker.
Add a photo to this gallery
Retrieved from "https://powerlisting.fandom.com/wiki/Power_Dilution?oldid=1506692"
Community content is available under CC-BY-SA unless otherwise noted.