Future Simon (Misfits) shows his immunity to Alisha's power of Sexual Manipulation by touching her.

Be immune to supernatural powers.

The ability to be immune to certain or all powers and their effects. Sub-power of Superpower Manipulation. Advanced version of Power Resistance. Variation of Immunity.

The user is immune to all or certain supernatural powers and effects, like certain animals are immune to scorpion poison or snake venom. This gives the user an advantage in certain situations, though potentially a disadvantage in others. 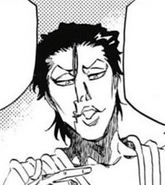 Askin Nakk Le Vaar (Bleach) with his "The Deathdealing" allows him to create an immunity to something once he ingests enough of that substance.

As they exist outside of the Force, the Yuuzhan Vong (Star Wars Legends) are immune to most Force powers that were targeted directly at them, though indirect means, such as objects thrown via telekinesis, were effective.

Being a "Special Child" due to demon blood, Sam Winchester (Supernatural) is immune to Samhain's Demonic Light.

Psychic Blanks (Warhammer 40k) are completely immune to any psychic powers due to being born with the rare Pariah Gene that makes them generate no presence in the Warp.
Community content is available under CC-BY-SA unless otherwise noted.