Issei Hyodou (Highschool DxD) can reach a new state of power by fusing his powers with his sacred gear.

Fuse with any creature or power inside of object, beings or powers.

"With the Strength Force, I am stronger. And The Sage Force makes me Smarter. Together They will Make me Something New. Something Better."
― Hunter Zolomon to Wally West and Barry Allen (DC Comics)

The ability to fuse oneself with any power or being inside of object, beings or powers.

Users are able to fuse themselves with a power/creature inside object, beings or powers to combine their physical attributes with that of the creature or power. The complete acceptance and reliability of the contained power or creature are sometimes required to initiate the ability itself. The ending result being the user becoming many times more powerful and achieving enormous levels of energy. Users will gain markings on their bodies, and will also gain weapons to use.

Vizard (Bleach) can infuse themselves with their Hollow powers.

Ichigo Kurosaki (Bleach) infused with is powers was able to Transcendent the powers of shinigami/Soul Reaper and Hollow.

Jinchuriki (Naruto) can fuse with their respective Tailed Beasts, enhancing their Nature Transformation techniques or augmenting their physical strength...

...Naruto Uzumaki infusing himself with the Yin Chakra of Kuruma, the Nine-Tailed Fox...

Sasuke Uchiha (Naruto) transplanted of Itachi's Mangekyō Sharingan into his own, vastly enhanced his Ocular Techniques with it. 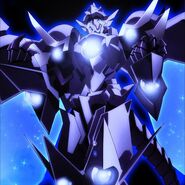 Jean Grey (Marvel Comics) can infuse herself with the Phoenix Force.
Add a photo to this gallery
Retrieved from "https://powerlisting.fandom.com/wiki/Power_Infusion?oldid=1506701"
Community content is available under CC-BY-SA unless otherwise noted.