Will Stronghold (Sky High) attains his Super Strength and Flight from both his parents.

Imitate the powers of your parents.

"Cyclops: Jean, I've been wondering—will you marry me?
Jean Grey: Cyclops! Well, if we have children, they'll be mutants. They'll face the same problems we have all our lives.
Cyclops: I wouldn't have it any other way."
― X-Men, "The Final Decision"

The condition to have the talents and/or powers of one or both of your parents. Sub-power of Ancestral Evocation. 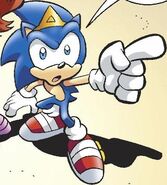 Catwoman (Batman Beyond) inherited the ability to replicate herself from her father Danton Black/Multiplex, but unlike Danton who can create an infinite amount of duplicates, she can only make nine copies of herself at a time.

...claws from his father, Wolverine.

...and his shapeshifting abilities from his mother, Mystique.

Hulkling (Marvel Comics) inherited his shapeshifting abilities from his mother, Princess Anelle of the Skrulls. 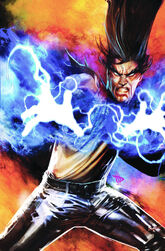 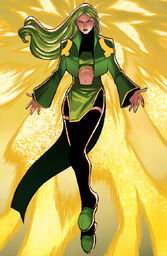 Norm (Norm of the North) possess the unique trait to speak and emote like a human which he inherited from his grandfather.
Add a photo to this gallery

Mikan Sakura (Gakuen Alice) inherited her Alice's from both of her parents.

Alvis Hamilton (Last Exile) is a Key to Exile who carries the genetic information necessary to activate one of the Exile ships, which is passed down from mother to daughter.

Hinami Fueguchi (Tokyo Ghoul) is one of the rare Ghouls to have inherited two different kagune types from both of her parents; a Rinkaku from her father and a Koukaku from her mother.

Shoto Todoroki's (My Hero Acedamia) quirk, Half-Cold Half-Hot, is a combination of his father's Hellfire quirk and his mother's ice based quirk.
Add a photo to this gallery

Jin Kazama (Tekken) inherited the power of the Devil Gene from his father, Kazuya Mishima and paternal grandmother, Kazumi Mishima neé Hachijo.
Add a photo to this gallery

Jennie Bowman (Heroes) inherited her Fire Breath from both her parents.
Add a photo to this gallery
Retrieved from "https://powerlisting.fandom.com/wiki/Power_Inheritance?oldid=1224783"
Community content is available under CC-BY-SA unless otherwise noted.