Fukuro (One Piece) measuring the doriki of the CP9

The power to measure the power levels of their targets. Sub-power of Power Detection, Power Level Manipulation, and Scanning. Variation of Sense of Strength.

The user can detect/measure someone's power and level of strength.

Captain Comet (DC Comics) can evaluate his opponents' power levels with his Sense of Strength.

A Scouter (Dragon Ball series) can detect and read an individual's power level.

Karin (Naruto) is a sensor of such caliber that she can sense the level of chakra of her targets.

Using Enemy Zero, Gyokuro Shuzen (Rosario + Vampire) can read any power and Yokai energy she scans with the eyes on her palms, right down to quality and quantity.

The Boosted Gear (High School DxD) can determine an opponent's power level and tell Issei when his boost has built up sufficient power to possibly defeat an opponent, either by utilizing it himself or transferring it to an ally. 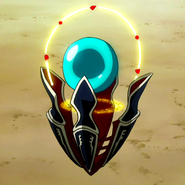 A Magic Power Finder (Fairy Tail) measures the power of a spell's strength when the spell makes contact with the item.

Callisto (X-Men: The Last Stand) is able to sense the presence and power levels of other mutants, reading Jean Grey as a Class 5.
Add a photo to this gallery
Retrieved from "https://powerlisting.fandom.com/wiki/Power_Level_Measuring?oldid=1521964"
Community content is available under CC-BY-SA unless otherwise noted.