Develop an ability to counteract another person's power.

"Save your sympathy for robot-brain here. Now that he's close, I've transformed my body into neutronium, an element which absorbs all energy. It knocked out his power system. Before you vote, I'd better tell you my power is limited. I've never tried it on more than one adversary at a time."
― Hart Druiter/Nemesis Kid, both demonstrating and explaining about his signature power (DC Comics)

The ability to develop powers to counteract another person's power. Sub-power of Reactive Adaptation, Power-Shifting, and Superpower Manipulation.

Hart Druiter/Nemesis Kid (DC Comics) gains powers that counteract/oppose his enemies', but only one per enemy.

While he doesn’t have any other power, Aaron Nicholson/The Answer (Marvel Comics) has the ability to develop counteractive/opposite powers against his opponents, but only one or two per enemy.

The Stalker (Ben 10: Ultimate Alien) was specifically created to oppose the powers of all of Ben's Ultimatrix aliens, except Nanomech and Way Big.

The Guardians (Breath of Fire III) were created by Myria to oppose the powers of the Brood.

Wall Eehto robot (Fairy Tail) can create Weakness Soldiers to counter the magic of his enemies.

Aigis (Persona) is an Anti-Shadow Suppression weapon, an android created to oppose the powers of Shadows and destroy them. 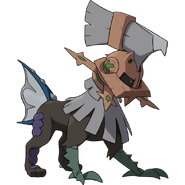 Type: Null (Pokémon) was created by the Aether Foundation to oppose the powers of the Ultra Beasts. 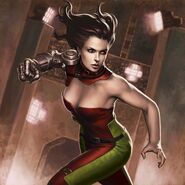 Arden Lyn (Star Wars Legends) is a master of Teräs Käsi, a martial arts discipline specifically created to oppose and counter the powers of the Jedi. 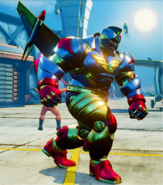 Mech-Zangief (Street Fighter series) was specifically created to counter and combat Zangief.
Add a photo to this gallery
Retrieved from "https://powerlisting.fandom.com/wiki/Power_Opposition?oldid=1515489"
Community content is available under CC-BY-SA unless otherwise noted.