"Sleep now Bruce and forgot forever. Struggle no more and give me all of your power?"
"You think you can live with it. Take it. Take it ALLLLLLLLLLL!!!!!!"
― David and Bruce Banner/Hulk (Hulk)

The power to overload a target's powers. Sub-power of Superpower Manipulation. Variation of Overloading.

The user can overload a target's powers, which generally results in unconsciousness or damage to the target in a number of ways. 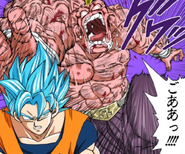 ...eventually overloading him with the stress leading to his death.

Blue kryptonite (Smallville) imbues Bizarro with so much power that he overloads and explodes.
Add a photo to this gallery
Retrieved from "https://powerlisting.fandom.com/wiki/Power_Overload?oldid=1673104"
Community content is available under CC-BY-SA unless otherwise noted.