Hidden Moon (Valiant Entertainment) can weaken the abilities of other psiots within a certain radius of himself.

The user can reduce the powers of oneself or others. Note that user cannot actually create anything, simply decrease what exist, no matter how little or big there is. 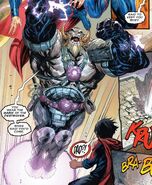 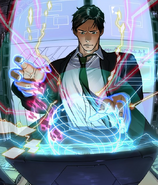 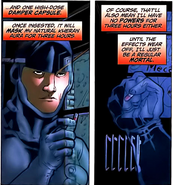 Smoker's Nightstick (One Piece) has a bit of Sea-Prism Stone/Seastone in the tip for negating and weakening Devil Fruit power users.

Fenton Works gadgets like the Specter Deflector (Danny Phantom) can weaken/cancel out ghost powers when they wear or come in contact with it. It allows it wearers to avoid any ghost power affects

Skulktech 9.9 (Danny Phantom) can fire blue ghost rays or the Phantom Palm Pummeler to weaken their half-ghost nemesis Danny Phantom and revert him back to his human form.

(Wakfu) that object can block magical powers of others
Add a photo to this gallery
Retrieved from "https://powerlisting.fandom.com/wiki/Power_Reduction?oldid=1526349"
Community content is available under CC-BY-SA unless otherwise noted.