The power to replicate the powers of others. Sub-power of Superpower Manipulation. Not to be confused with Power Absorption.

The user is able to mimic and replicate the powers of objects and/or subjects around oneself. Unlike Empathic Mimicry, this is not empathetic, but strictly physical or psychic as it simply mimics the psychic energy outputs, genetic structure or superhuman physiology that enable abilities in other people. User can even stack several powers together, which may lead to Power Mixture. 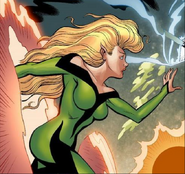 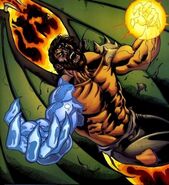 Everyman (The Simpsons)
Add a photo to this gallery 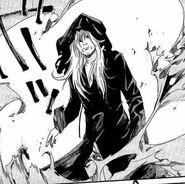 Ludger (Alive: The Final Evolution) can copy powers of "Comrades".

OG73-1/Seventhree (Dragon Ball Super manga) is an artificial lifeform capable to copy the powers of other by grabbing their necks.

Velveno (Fairy Tail) using Magical Drain to copy the Magic of any person he come in contact with. 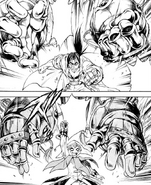 Neito Monoma (My Hero Academia) can use his Quirk Copy to replicate the Quirk of anyone who he touches.

After removing her limiter, Gyokuro Shuzen's (Rosario + Vampire) Enemy Zero ability expands to allow her to copy other monsters' powers.
Add a photo to this gallery

MechaMew2 (Pokemon Live!) can learn any Pokemon attack that is used on it.
Add a photo to this gallery 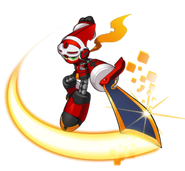 After defeating and absorbing Brandish corrupted Xel, Beck (Mighty No.9) can change his appearance and able use few move of Brandish had.

Kirby (Kirby) is a well known user of this ability, capable of copying the powers of his enemies by swallowing them or their attacks.
Add a photo to this gallery